Pauline, one of the Malaysian Seramas, has been on a nest of leaves, beneath a fatsia bush,

under the cover of ferns for about three weeks. Underneath her were four little eggs. This morning when I checked on her, she got a little more “fuzzed up” than normal.

Then I noticed the egg shell next to her. I picked her up to find that there were three little chicks in the nest of leaves, and they were awaiting the arrival of number four. 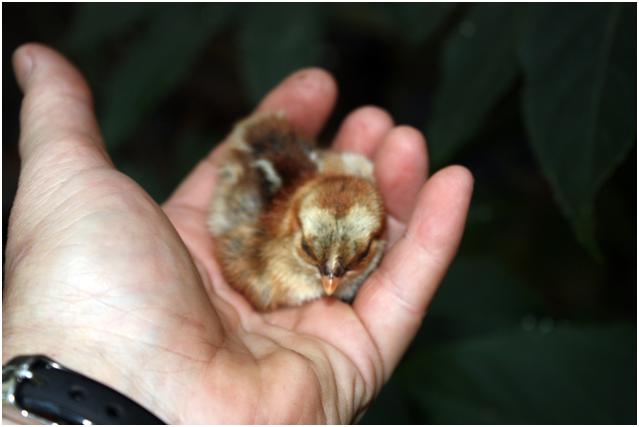 Now, you can’t tell me that’s not CUTE! The chicks are very small and will weigh in at less than a pound when full grown. When the twins were younger, and I had new chicks, I would put one of the little chicks in my shirt pocket and walk over to their house. When I got inside, they would say, “Mammy, what you got in you pocket?” Then I would remove the chick from my pocket and let them hold it…good memories.

When baby number four makes its debut, I will move them to a safe place away from whatever might be coming through in search of a snack.

4 thoughts on “Grandmother again! (don’t get too excited yet)”