Thursday morning I decided to install a perch for Phil and Kay.  What I had in mind was a nice big limb, or some part of a tree.  I drove around the property on the golf cart to see what was available.  Down by the old pond, I spied this small tree that was growing all wompy-jawed.  It just grew up about six feet and then made a right turn (or left turn depending on which way you were looking at it).  It was perfect for what I was thinking of doing.

Now, to cut the thing down.  I couldn’t find the limb saw.  The chain saw that I found was bigger than the one I learned on in Alaska, and since I have not met my deductible, I thought it best to use the ax.  The ax, though dull, would have been fine had I been able to hit the same spot twice in a row.

I chopped until I was worn out.  Then, I just threw the ax down, yelled, “Timber!” and pushed on the tree until it broke.  The tree, though small, was much heavier than I had anticipated, but I got on the golf cart and managed to drag the thing to the chicken coop.

Once I got it through the door, I stood it in a corner 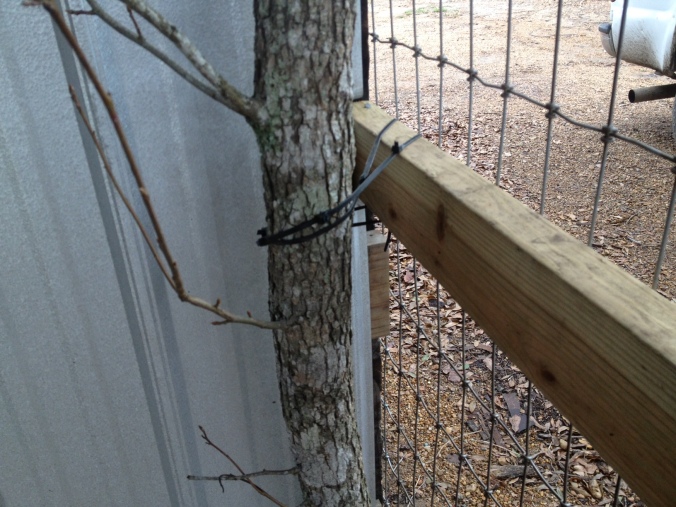 and tie-wrapped it to some two by fours.  Its not going anywhere.

I even attached a feeder.  I believe that Phil and Kay will really enjoy their new perch…

that is, if I can ever get them to try it out.

3 thoughts on “The new perch”