Several years ago, I posted this picture 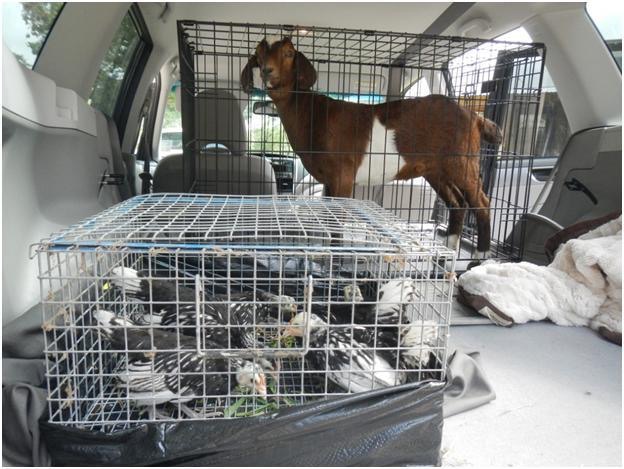 on The Chicken  Chronicles.

I had driven to my cousin’s farm to get some chicks and a goat.  At the time, I was driving a Subaru Forester, which had plenty of room for my cages. In fact, I was quite proud of my little ‘farm vehicle’.

Joel always reads my blog, and until that particular post,

I don’t think he realized that I occasionally used our car to transport livestock. Well, now that the cat was out of the bag, he made the suggestion that the next time I needed to haul a goat, I might want to put it something other than the car.

Not long after that, we traded in that little Forester for an Outback. One of the first things Joel said after driving it home was, “Susan, please don’t put a goat in our new car”.

Last week we traded that Outback for another one.  Because of the places I shop, I figured I should continue driving the other Outback; one that was set up to transport Piper.  But, Joel said that I should drive the new one. He said, “Susan, as long as you don’t put a goat in it, everything should be fine”.

About thirty minutes after that conversation, UPS dropped off this package.