There is a new Disney princess named Moana, and I had no clue about that…until yesterday.

You see, Josie keeps up with all those princesses, and not only that,

she will go to any length to align her wardrobe with theirs.  And that’s just what she did yesterday.

Like I said, I knew nothing about this Moana chick, so yesterday evening, when the four next door showed up for our park outing, I was a little surprised to see Josie’s fashion choice. (Remember, I didn’t know.)  But…I went with it.

You’ve got to give the girl high marks for creativity, because when I examined her outfit more closely, I realized that she had fashioned her top out of a

Columbia fleece neck warmer.  She was able to keep it in place with a white cord tied around it. 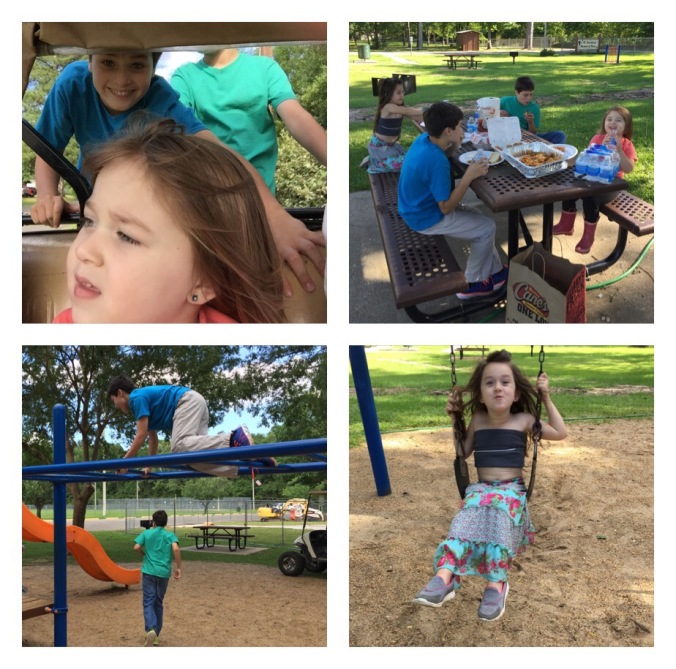 we had our little outing…outfit and all.

I have to admit that when I opened my door and saw what Josie was wearing, the first thing out of my mouth was, “Is that what you’re wearing to the park?”

Hudson immediately chimed in with, “If you walk around half naked it’s a disgrace…at least that’s what Mommy says.”

Oh well, the things you have to put up with when you’re keeping up with the Disney’s.

So, a couple of weeks ago, I was watching my chickens have fun with some new straw that I had spread on the floor of their pen. Out of the corner of my eye, I saw Josie headed my way dragging what looked like a turtle on a leash…only the leash 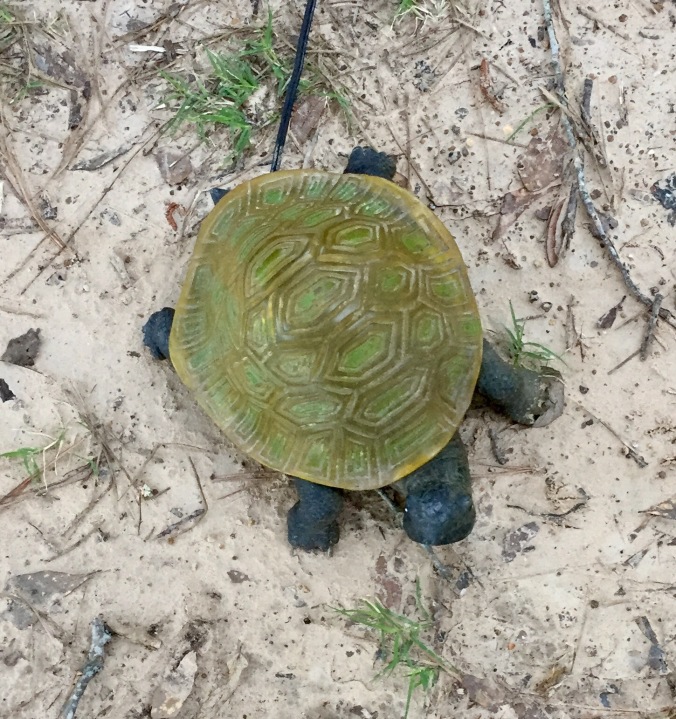 was attached to the turtle’s rear.

I just stood there as she came closer.  Then, being a curious person, I finally said, “Whatcha doing, walking your turtle?” 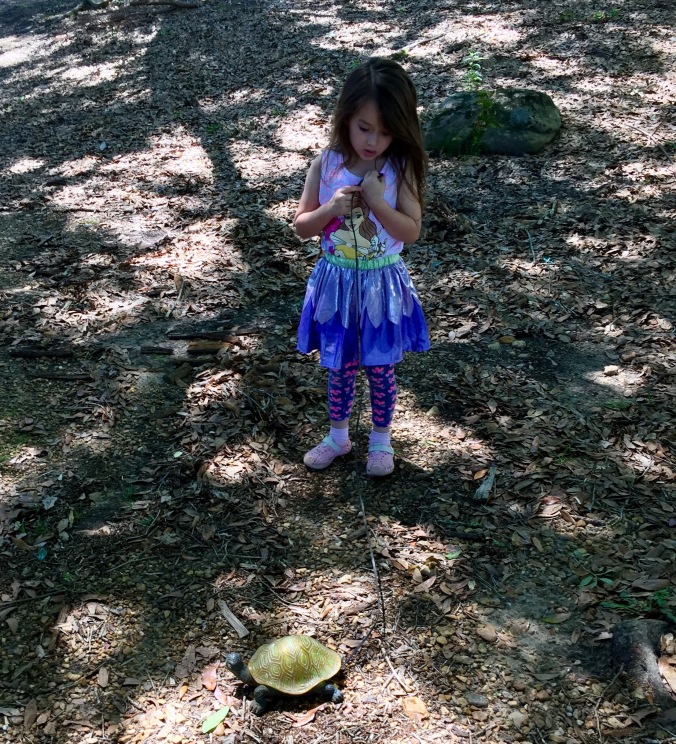 She came to a stop, turned and looked at the thing and answered, “Yes. Her name is Rock. She’s a girl and I’ve trained her not to bite or snap”.  Then, she continued on her way.

here she came again, with Rock bouncing backwards over roots.

This lasted for a few days, and then I discovered Rock in the grass outside my back door.  So I picked her up and put her on 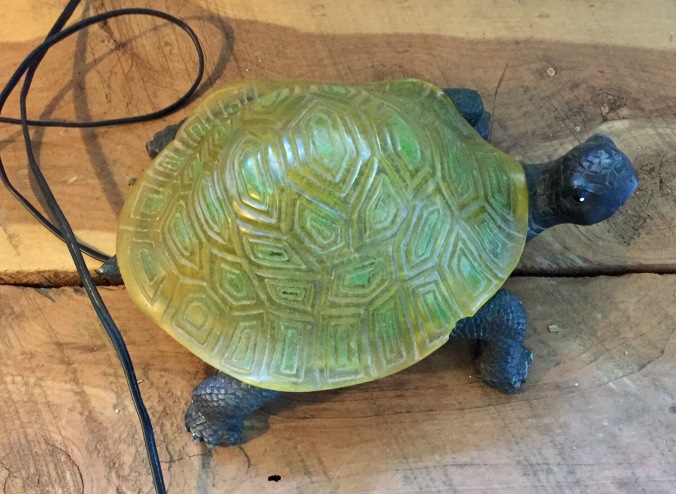 a bench on my sun porch.  She’s been there ever since, so I suppose Josie has moved on to other things.

Once I even thought about taking Rock for walk…you know, just to see what the attraction was.  But I figure we’ve entertained the neighbors way too much as it is.

Joel and I love Cades Cove.  Evidentially we aren’t the only ones, because the place boasts about two million visitors a year.

That’s why we try to go in the off season.  When we’re in the Smokies, we go into the cove sometimes twice a day.  A couple of years ago, we hiked its eleven mile loop road.   If you ever get the notion, I highly recommend the walk…just be aware that the last two miles are longer than the first nine put together.

So, we don’t hike those last two anymore. 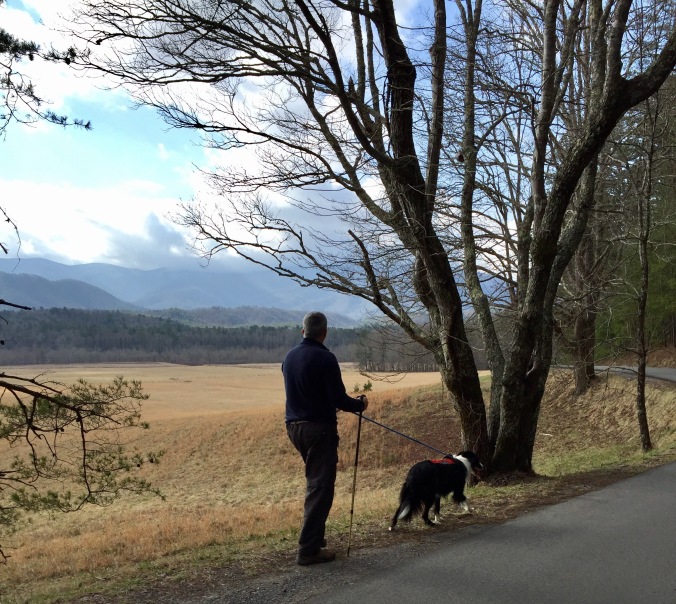 Although we go there a lot, there seems to be no end to what you can learn about the place and the people that once called it home.

This time, Tim told us about a tree called the Pearl Harbor Tree, a sweet-gum tree with a tire rim around its trunk.

We got on line to see if we could find any information about it and its location.  Then…we went into the Cove to look for it.

On a hill, in a now wooded area that used to be the front yard of the Golman Myers family, stood the tree … straight and tall.

It seems that Golman Myers was listening to his transistor radio when it was announced that the Japanese had bombed Pearl Harbor.  Golman, who had two sons eligible to go to war, went into the woods, pulled up a sweet-gum sapling, and transplanted it in the front yard. He put a tire rim around it so it wouldn’t get run over.  When he was done, all he said was, “We will remember this day forever.”  He was right.

Some years later, one of Golman’s sons had this tag made and chained it to the tree.

So, if you’re ever in Cades Cove, and you’re not in the mood to hike that eleven mile loop,

it’s well worth a short walk up a wooded hill to see this piece of history.